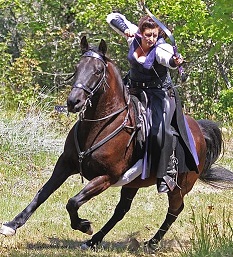 Mounted archery dates back thousands of years, and is one of the earliest forms of warfare. Horses gave humans speed and additional height. By learning to shoot a bow from horseback, riders gained an advantage over anyone on foot. Mounted archery also served as an effective hunting practice, allowing riders to see and bring down large, swift game.

The mechanization of warfare soon left archery outdated, but archery enthusiasts have continued to study the craft. Modern mounted archery now continues as a martial art and a sport. It is highly popular in Hungary and Germany, though competitions are also held in the United States, Canada, and throughout Europe.

The competitor and horse look like they are  right out of ancient history: the horse freely gallops forward as the rider aims his bow and sends an arrow flying home to its target as the pair gallops on. But thanks to a revival of mounted archery, this ancient art is now becoming a popular sport – one that you may see more and more in the future years.

Modern archery competition challenges a horse and rider to navigate a course of targets. While the specific rules vary from one competition to another, a rider’s goal is to shoot accurately at a target from a moving horse. During some competitions, courses are designated a maximum allowable time; exceeding that time in completing the course results in penalty points. As the horse and rider proceed through the course, the rider shoots an arrow at each of the targets. The arrow’s placement on the target is scored.

Other competitions challenge a rider to shoot as many arrows as possible at a single target within a given time frame. The horse must be moving, and the rider’s skill in shooting rapidly, along with their physical endurance, can make the difference between a winning run and a losing one.

To compete in mounted archery, a rider must first learn the difficult task of shooting a bow and arrow from the ground. The bow used for modern archery is lighter and smaller than a typical hunting bow, which gives the archer increased maneuverability while on a horse. Once the rider has mastered the art of shooting the bow and arrow, he or she then faces the challenge of replicating the skill while on a moving horse in an arena.

Perhaps most challenging of all is the fact that the horse must be controlled by the rider’s seat and legs, since the rider will be using his or her hands to shoot the bow and arrow. The horse must be sensitive to the rider’s direction, despite the excitement of moving forward at a canter or gallop. Horses must also be well-trained and desensitized to the sound of a bow and arrow. Horses with steady gaits are preferred, since this makes it easier for the rider to aim at the targets.

If you’d like to learn more about it, visit the Mounted Archery Association of the Americas’ website.