Prior to Chistianity, people celebrated a midwinter event called Yule (the Winter Solstice).  During this period  supernatural and ghostly occurrences were said to increase in frequentcy, such the Wild Hunt, a ghostly procession through the sky. The leader of the wild hunt is the god Odin, usually 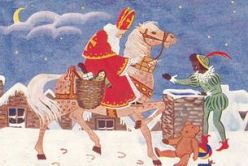 In the Netherlands, Belgium and Luxembourg,  Santa Claus is called “Sinterklaas” and the holiday for giving gifts is December 6th. He traditionally rides the rooftops on a white horse, known by various names.  Sinterklass is an elderly, stately and serious man(unlike our jolly Santa Clause) but does have the transitional white hair and a long, full beard. Also like Santa, he wears a long red cape and a red hat, but holds a long, gold-colored ceremonial shepherd’s staff with a fancy curled top.

To keep track of who should receive presents, Sinterklass writes in the book of Saint Nicholas notes on all children – the start of the legend of Santa’s list of who was naughty or nice.   Sinterklass’ solution to helping the poor by putting money in their shoes  later evolved with Santa Claus into giving presents.

After going into hiding for a few centuries during the Reformation when public celebrations were banned, Sinterklass returned to ride over roof tops and deliver presents through chimneys to good girls and boys – but now his horse was grey.  Either people realized that whites often turned grey as they age or riding over all those roof tops turned the horse darker, but you’ll either hear Sinterklass has a white or gray horse.  Children leave a carrot, apple and/or hay as a treat for Sinterklaas’ horse.

Enjoy your holiday and remember that horses were the start of gift giving – and give  your horse a treat in return!

Wishing you a wonderful holiday season and all the best in the new year! 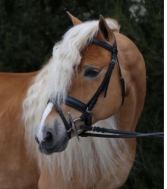 As many long-time equestrians get older, our taste in horses begin to change.  Where once we all rode big Warmbloods or Thoroughbreds, we start to notice just how high it is to mount and dismount these breeds.  Many of us have problem knees that the horse’s height can aggravate.  Finally, some of us may want to try other equestrian sports, such as combined driving.  Check out the breeds that might the needs of the riders “of a certain age” and you will probably come across the Haflinger.

Haflingers were bred to be versatile enough for many under-saddle disciplines, including endurance riding, dressage, equestrian vaulting and therapeutic riding, but still solid enough for draft and driving work. The Haflinger was originally developed to work in the mountainous regions of its native land where it was used as a packhorse and for forestry and agricultural work.

The history of the Haflinger horse traces to the Middle Ages. The origins of the breed are uncertain, but there one theory is that Haflingers descend from horses abandoned in the Tyrolean valleys in central Europe by East Goths fleeing from Byzantine troops in 555 AD. These abandoned horses are believed to have been influenced by Oriental bloodlines which may help explain the Arabian physical characteristics seen in the Haflinger.

Haflingers are always chestnut in color, and come in shades ranging from a light gold to a rich golden chestnut or liver color. The mane and tail are white or flaxen.  The height of today’s Haflinger has increased from 13hh to between 13.2hh and 15hh.  The first official documentation of the present day Haflinger (named for the Tyrolean village of Hafling) was in 1874 when the foundation stallion 249 Folie was born of the half-Arabian stallion 133 El’ Bedavi XXII crossed with a refined native Tyrolean mare. All modern purebred Haflingers must trace their ancestry directly to Folie through seven different stallion lines: A, B, M, N, S, ST, and W.

The head of the Haflinger is refined, with the neck is of medium length, the withers

pronounced, the shoulders sloping, and the chest deep. The back is medium-long and muscular, the croup is long, slightly sloping and well-muscled. The legs are clean, with broad, flat knees and powerful hocks.  The Haflinger has rhythmic, ground-covering gaits. The walk is relaxed but energetic. The trot and canter are elastic, energetic, and athletic with a natural tendency to be light on the forehand and balanced. There is some knee action, and the canter has a very distinct motion forwards and upwards. An important consideration in breeding and what makes the Haflinger an ideal horse is its temperament. A requirement for a quiet, kind nature has become part of the official breed standard and this is part of any breed inspection.

The Haflinger is also recognized around the world for another reason.  On May 28, 2003, a Haflinger filly named Prometea became the first horse clone born.  But for regularly born Haflinger, registration is done through the American Haflinger Registry .  There are many rules there for registering and breeding your Haflinger, as well as tips for buying your first Haflinger.

If you are looking for a horse that is safe, versatile, intelligent, athletic and long-lived, the Haflinger may be a great choice.

Ireland is a land of incredible beauty and incredible horses.  The following three breeds were developed to work with  people of Ireland under a variety of tough conditions. Their hardiness and easy temperament are legendary.

Legend says that when the Spanish Armada sank off the Connemara coast in the 16th Century, the horses, a mix of Barbs and Andalusians, swam to shore and bred with the native ponies running wild in the mountains.  The resulting Arab blood is still recognizable in present day Connemaras. Steep mountain trails and treacherous bogs, fierce winds sweeping in from the Atlantic in the winter, and relatively small areas of grazing developed a breed that was tough and surefooted.  The Connemara became known for their agility and hardiness. The Irish soon came to depend on this stocky little horse as a means of transportation, both ridden and driving, and for its ability to pull a plow, cart turf from the bogs or seaweed from the shore, and carry heavy baskets of produce to market.  On Sunday, the pony carted the family off to church. Because of this strong partnership, the Connemara developed an easy-going and reliable temperament.

The Connemara is the largest of the pony breeds.  They range in height from 13–15hh. The most common colors are grey and dun, but also acceptable are black, bay, brown, chestnut, palomino and even roan!

The Irish Draught is sometimes referred to as an RID for Registered Irish Draught. According to the legends, it was the god Lugh who brought the horse to Ireland.  He was and Irish god viewed as a   hero and High King of Ireland’s distant past.  Lugh’s special festival, Lughnasa, was celebrated at harvest time in early August. As a means of reinforcing tribal bonds, Lughnasa was a time for meeting, for settling arguments – and for horseracing. The Irish farmer needed a horse that could do more than just plow the field.  Like the Connemara, the Irish Draught can work all week, successfully go fox-hunting on Saturdays, and drive the family in their cart to Church on Sunday.  During the Great European Wars, they were used as army artillery horses.

The Irish Draught is an active,  powerful horse with substance and quality. Colors include any solid color, including grey.  Height is typically 15.3hh to 16.3hh and has an exceptionally strong and sound constitution.They are intelligent with a gentle nature  and common sense.

From about 1885, people travelling  in the British Isles (then including all of Ireland) began to use a distinct type of horse to pull their vardos, the caravans in which they had just begun to live and travel.  The Gypsy  Vanner  was bred by the Roma (also called Romani or Romany), a traditionally nomadic ethnic group. The Roma are widely known as “Gypsies”. They used colored horses, included a significant number of colored Shire horses, which had become unfashionable in mainstream society and were typically culled. Among these were a significant number of colored Shire horses. The term “vanner” dates to at least 1888 and referred to a type of horse rather than to a distinct breed.   A “vanner” is “a light horse suitable for drawing a small van.

The first glance, impression of the breed is its stature as a small draft horse with feathering, muscular development and size. The height is usually between 13.2hh to 15.2hh.  One of the unique characteristics of the breed is the excessive feathering on the rear of the fore and hind legs, starting from the knee and hock and extending down and over the hooves. The leg feathering provides natural protection to the legs from the weather and working conditions. The Gypsy Vanner is not a breed based on color, although the easily recognizable coat colors set the breed apart from others. The acceptable descriptive terms for the coat colors of the Gypsy Vanner horse are:

The breed temperament should be gentle, cooperative and willing, yet powerful. The breed should be relaxed, mannerly, and respectful of its environment. Their willingness should be expressed in their ability of being both ridden and driven.